When Do German Shepherds Stop Growing?

When you adopt a German Shepherd as a puppy, you bring home this tiny, cute, cuddly, bundle of fur that fits in your hands. He or she amazes you with adorableness and it seems as if “Aww” became the puppy’s name.

Fast-forward by a year and you probably wonder if your dog decided to grow at the 98th percentile. After two years of owning a German Shepherd from puppyhood to the not so terrible twos, you probably consistently ask yourself, “When will this dog stop growing?”

The short answer is German Shepherds reach their full growth at about three years of age. The five-pound puppy you brought home will become a full-grown dog of about 90 pounds. Essentially, she or he will grow to the size of a teenager in weight, but about 26 inches in length. Of course, that’s measured as the dog stands.

When the dog jumps up to greet you, you’ll probably come close to looking each other in the eyes. You chose one of the largest dog breeds in the world.

As long as you feed the dog healthy food and walk it each day, your German Shepherds will remain lithe and physically fit.

While these dogs reach physical maturity at three years of age, they typically have a median life expectancy of about ten years. That’s in human years. In dog years, that’s about 66 years old.

Many German Shepherds live longer than that. Your puppy might grow up to live until the age of 12 or 13, which equates to 77 to 82 years old. You will get many years of love from this breed of dog.

The Stages of Growth: Newborn to Adulthood

Perhaps you got to visit with the puppies when they were firstborn. That tiny phase of newborn puppyhood doesn’t last long. Enjoy it while you can.

Your GSD puppy will remain a newborn for just two weeks. They gain weight quickly in their early days. Each day, your puppy will gain between 2.29 to 3.35 ounces (65 to 95 grams). As a newborn, your German Shepherd probably weighs around four pounds. The puppy eats and sleeps but doesn’t do much else. 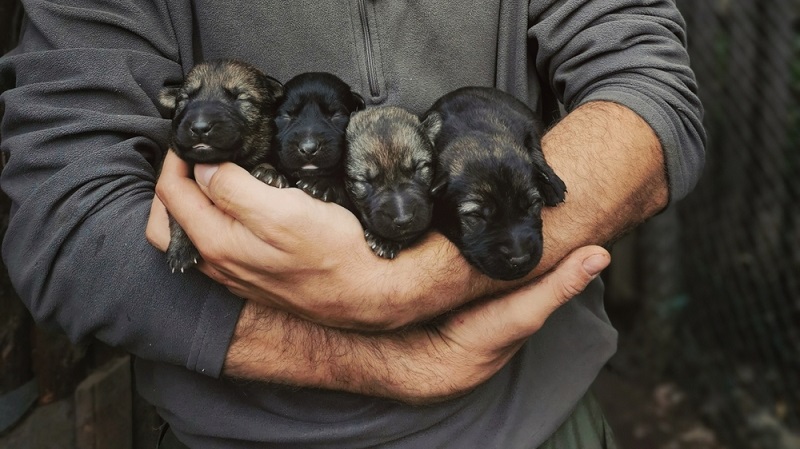 Childhood and Teen Years All in One Year

Most people think of a dog’s rapid growth as a childhood phase. When you calculate the median age of a dog’s growth in human years, overall it comes out to about seven years of dog life to one year of human.

That’s pretty rapid growth. They gain weight and height accordingly. At the end of one year, the dog typically weighs about 49 to 50 pounds. The German Shepherd will nearly reach its full height by this time, too.

Let’s break it down by months how your German Shepherd moves through childhood to teen years in one year.

Veterinarians refer to every few weeks, then months as a different growth phase of early development. They call the two weeks to four weeks period transitional stage. T four weeks the typical female weighs between 4.5 to 8 pounds and stands three to six inches tall. The males may weigh between 5.5 and 9 pounds and stand four to six inches in height. When it comes to maturity stage for training, you can start even at the transitional stage, especially when you use positive reinforcement.

The socialization stage lasts through their third month. In the middle of this phase, the German  Shepherd puppy usually experiences a growth spurt. By the end of the three months, your GSD puppy will measure about 10 to 11 inches in height. Females will weigh between 11 and 17 pounds, males will weigh between 22 and 30 pounds.

Try not to think of your German Shepherd pup as a juvenile delinquent as they pass through this period from three to six months. At four months, your furry friend reaches the halfway point of height and weight.

At the end of their fourth month, your puppy becomes a man or woman-dog. At this point of German Shepherd development, it reaches sexual maturity.

At six months, the German Shepherd exits the juvenile stage. By now, you’re probably saying, “When will my German Shepherd stop growing?” Well, he or she has reached about 70 percent of the final growth. 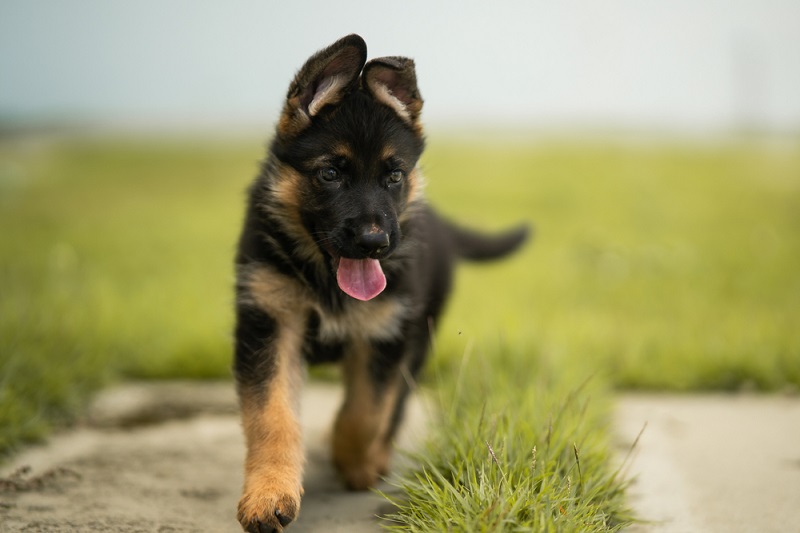 Regardless on the stage of growth, always make sure your German Shepherd pup is healthy. At Vetericyn, we have wellness products that can help keep your pup healthy and happy.