Our goal at Vetericyn is to not only develop the safest, cleanest, most advantageous wellness products for animals, but to expand our network of partners and supporters who share the same passion for animal healthcare, community engagement, and collaboration. We also believe in supporting those who choose to work in animal health and agricultural science.

To honor those who are ready to take the next step in furthering the animal healthcare industry, our team at Vetericyn has created a scholarship program to support future leaders and advocates for animal wellness. The purpose of Vetericyn’s 2019 Future Leaders of Agricultural & Veterinary Sciences Scholarship is to help financially support graduating high school seniors as they pursue higher education in agriculture, particularly with a focus on animal health and food science.

This year, our team at Vetericyn was able to select and reward two remarkable individuals from a largely talented pool of applicants. Our scholarship program proudly bestows two 2019 scholarships, each allotted for $1,500.

After reviewing stacks of fantastic essays, our team at Vetericyn has selected two candidates to receive the 2019 Future Leaders of Agriculture & Veterinary Sciences Scholarship. We are proud to announce that this year’s scholarship award winners are Isabella Kruba and Ainsley Peterson. 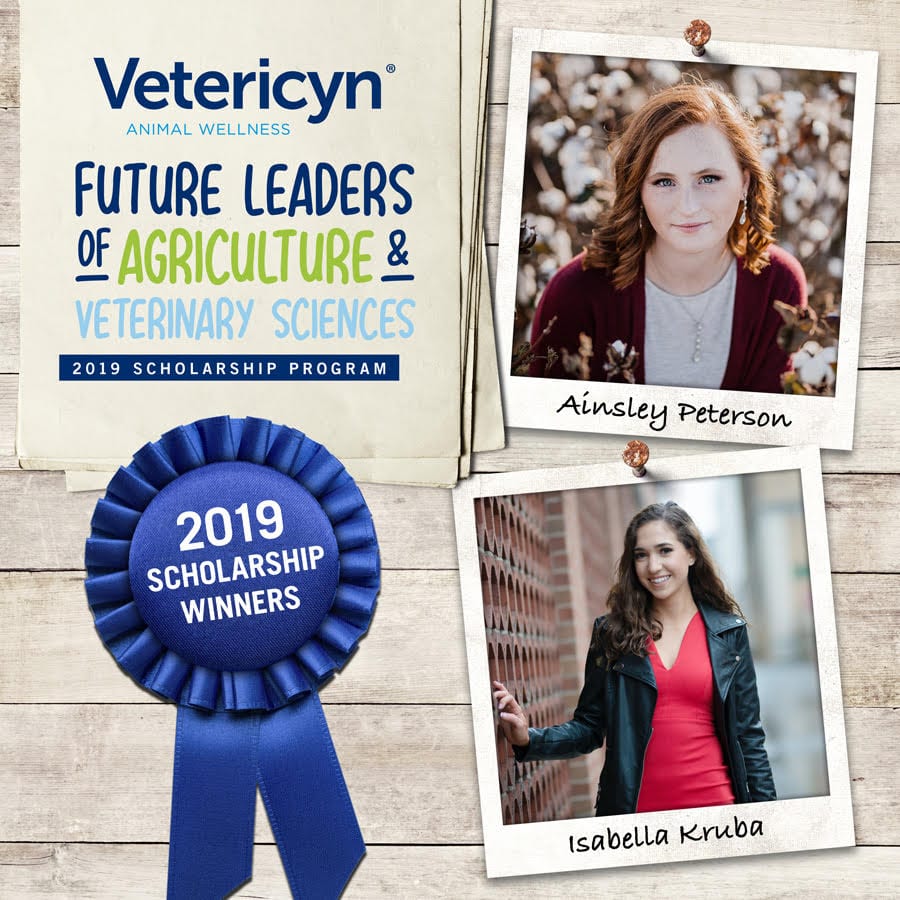 To say that Isabella served as a well-rounded, involved leader throughout high school would be an understatement. She excelled in academics, stood out as a star athlete, and served as a member of numerous clubs and organizations. Not only did Isabella make honor roll every semester, but she also completed her fourth year taking college courses at HACC and graduated from West Perry with a weighted GPA of 100.86. Today, she serves as a member of the National Honor Society, as well as a member of the FFA for the third year in a row. In addition to her strong academic background, Isabella was a member of her high school’s Student Council and Varsity Club all four years, as well. A four-year member of the field hockey team, Isabella was elected as a team captain for the last two years of high school.

As demonstrated, Isabella exemplifies what it means to be a true go-getter in many aspects. We are extremely honored to grant Isabella this scholarship as she advances on to study Veterinary and Biomedical Sciences at the Pennsylvania State University, in pursuit of opening her own practice as a Holistic Veterinarian one day.

An excellent student and devoted member of numerous clubs and organizations, Ainsley sets an example as to what it truly means to be a well versed, crafted individual. Throughout her high school career, she maintained a 4.0 unweighted GPA and earned her AA by taking dual enrollment classes at North Florida Community College. In addition to serving as a member of extracurricular clubs, such as 4-H, Sr. Beta Club, FBLA, and Student Council, her primary focus was placed on her involvement with the FFA where she held the following titles: Lafayette FFA Chapter President, Sub-District IIIi President, and District III President.

Ainsley has an impeccable academic record and has largely contributed to the numerous clubs and organizations she has been a member of. Though an evident leader in her community, what differentiates Ainsley is her background in agriculture, based on where she grew up. Not only has she competed in events measuring dairy evaluation, livestock evaluation, forestry, and more, she was raised on her family’s farm where she tended to the animals on a daily basis.

Our team at Vetericyn is honored to grant Ainsley with this well-deserved scholarship as she starts her first year at the University of Illinois at Urbana-Champaign. With plans to explore a major in Agricultural and Consumer Economics with a concentration in Policy and International Trade Development, Ainsley hopes to work towards developing and implementing better agricultural policies that will ultimately create a more sustainable industry for farmers.

The Future of Animal Healthcare

If you are a soon-to-be high school graduate and are interested in pursuing a career in agricultural or veterinary medicine, Vetericyn is ready to support you! As of November 1, 2019, we are accepting applications for the 2020 Future Leaders of Agriculture & Veterinary Sciences Scholarship. All applications are due by March 15, 2020. If this is a path you are passionate about and interested in exploring, apply now!